By Leadership ConnectOctober 15, 2018 No Comments

Did you know that the U.S. Congress experiences more turnover than any other area in the government? Up to 60% of congressional staff find new jobs each year. And for every fresh face coming onto the Hill, there is someone else rolling off.

Leadership Connect keeps subscribers updated on each change so they can reach the right people to influence.

Our new quarterly newsletter highlights key changes and statistics to help you get a better sense of what is going on… all in a quick and easy read. 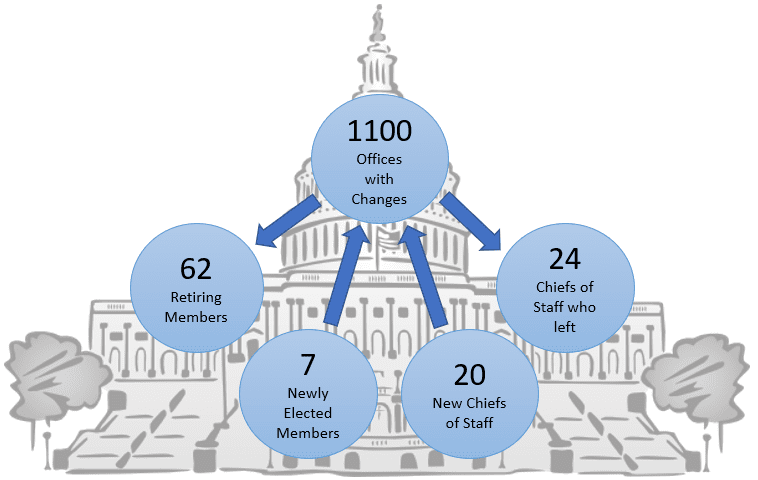 Within the past 12 months, we saw a total of 2,944 legislative staff changes!

Each member has a unique background and interests, as well as new staff to help support legislative goals. Knowing who to contact and who has other priorities saves countless productive hours.

Highlighted congressional staff changes from the past quarter:

Office of Representative Tom Garrett (R-VA, 5th)
Retiring Representative Garrett hired former Virginia State Delegate, Bill Janis, as his new Chief of Staff in May amid a tumultuous last term, where the Congressman and his former Chief of Staff, Jimmy Keady, had been under pressure from the House Ethics Committee.

Only a subscription to Leadership Connect includes daily updates and in-depth details so you can be a step ahead and be the first to develop relationships with new staff. Color photos and biographies help you prepare for successful meetings.