Tipping That Graduation Cap in the Legal World

The art of networking is a crucial element to any legal professional’s arsenal. Having the ability to pick up the phone and contact another counsel to bounce an idea off them is invaluable to both personal and professional development. Technology has given us the ability to strategically connect to other people in organizations throughout the country. One of the best ways for counsels to do this is by leveraging their law degree, and the school where it was attained.

Exploring law school connections in the corporate world can open doors and opportunities that may not be apparent at first glance. Below you can see the representation of top 10 law schools represented in Leadership’s F100 in-house counsel. Connecting with a fellow grad, no matter the year of graduation, is an easy way to expand your networking capabilities while also forging a strong relationship with other alumni. 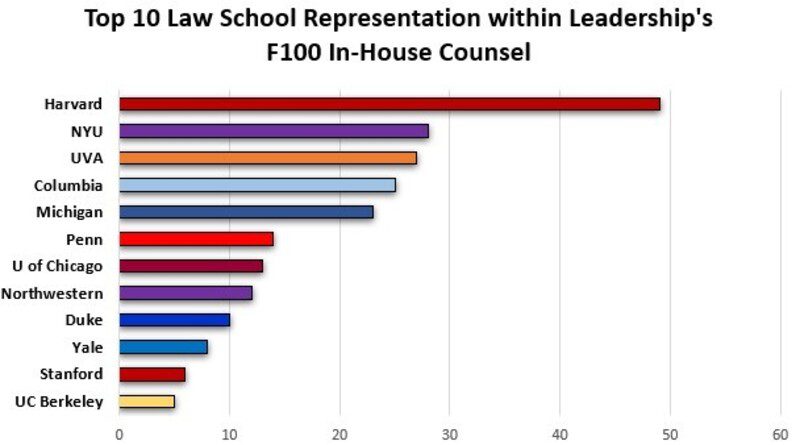 Harvard Law School has such a strong representation of in-house counsel in the F100 it should be no surprise that the law school has a some notable counsel in many of the top companies in the U.S. Walmart Inc. has two Harvard Law grads including Chief Legal Counsel Rachel Lee Brand and Senior Vice President and General Counsel of Global eCommerce, Jamie Chung. After graduating from Harvard Law in 1998, Brand started her career at the Supreme Judicial Court of Massachusetts as a law clerk then served two years as an associate at Cooper, Carvin & Rosental before rising to the prestigious Executive Office of the President under President George W. Bush and as a law clerk for Justice Anthony Kennedy on the Supreme Court of the United States. She has since served as Assistant Attorney General in the Department of Justice and on the Privacy and Civil Liberties Oversight Board during the Obama administration. Before moving to Walmart, Brand also served as Associate Attorney General in the Department of Justice during the Trump administration. Her Harvard Law degree and connections thereafter have enabled her to have the unique opportunity to serve under three different President’s administration. Chung started her career with a long stint at Cooley Godward LLP, focusing on corporate governance, securities and transactional matters.  She then moved on to be senior vice president and general counsel of the AAA of Northern California, Nevada and Utah. Another Harvard Law grad, Cameron Cohen, has used his legal talents to become VP and associate general counsel of payments, treasury, real estate and procurement at tech giant Amazon.com Inc. Cohen started his career with stints as an associate at Heller Ehrman LLP and Davis Wright Tremaine LLP, where he became a partner. He started at Amazon as senior corporate counsel, payments before becoming AGC, preceding his current position. At McKesson Corp., Harvard Law grad Robin Jacobsohn serves as senior vice president, associate general counsel. Jacobsohn began her career at Williams & Connolly LLP before moving to the federal government as Deputy General Counsel in the Office of the General Counsel for the U.S. Department of Defense and then as General Counsel for the Office of Personnel Management.

The connections and potential relationships don’t just end with the school name written on that law degree, of course. Even if you don’t have a top 10 or top 20 law school education background, there’s plenty of connections that play a role in landing a job in top companies. Friends, family, and previous working relationships all take a big role in determining a path toward an in-house counsel career. Using Leadership Connect’s in-house counsel community, you can explore all these options to improve your role, shape your team, build new relationships or strengthen new ones.