By Andrew Ramos-FlynnMay 4, 2021 No Comments

Current Department of Defense command and control (C2) programs aren’t optimized for the future, and there is a growing focus on information advantage and joint C2 capabilities across the military services. Traditionally, each military branch developed its own tactical networks tied to local hubs, but implementing emerging mesh networks can increase flexibility by modernizing the way computing is stored.

Last fall, Army Chief of Staff Gen. James McConville and Air Force Chief of Staff Gen. Charles Brown Jr. agreed to a two-year Army-Air Force partnership for the development of Combined Joint All Domain Command and Control (CJADC2), a tactical mesh network that will digitally connect all elements of the military services. The initiative expands on the existing JADC2 concept and is headed by Army Futures Command (AFC) and the Air Force’s A5 Strategy, Integration and Requirements office.

Project Convergence is the Army’s initiative to implement artificial intelligence and machine learning capabilities across air, land, sea, space, and cyber domains. AFC’s Cross-Function Teams are at the forefront of the project’s development.

The original due date for offers passed on 4/27/21 — sign up for Leadership Connect’s FedSpend alerts so you don’t miss future opportunities. 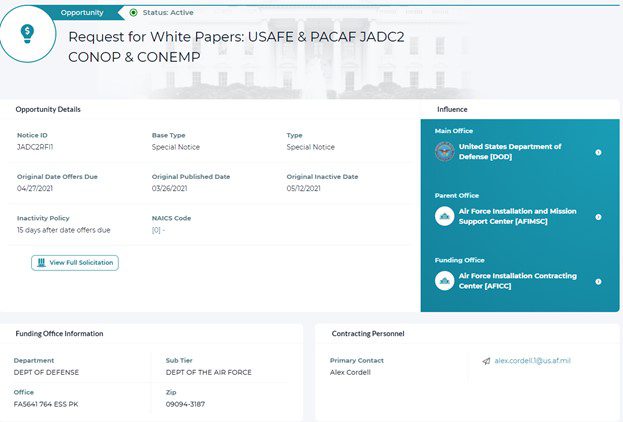 Other key stakeholders include: