What is a Conference Committee?

Before a bill becomes law, the House and Senate must both pass identical versions of the same bill and send that bill to the president’s desk. Typically, the House will pass a bill that the Senate created, or the Senate will pass a bill that the House created. If the two chambers pass separate legislation on the same subject, they must be reconciled into a single bill to send to the president. Differences between the texts can often be resolved through an informal process in which a single bill is passed between the chambers with amendments. In the case where the differences between the two bills may be too significant to be reconciled through a handful of amendments, the House and Senate would enter the formal conference committee process.

For a conference committee to begin, one chamber must pass the bill that originated in the other chamber with the text of their bill substituted. Both the House and Senate must state their disagreement with the other chamber’s bill, either insisting on provisions in the bill or opposing provisions.

Conferees and Their Jurisdiction

Before the bills can begin to be reconciled through a conference, both chambers of Congress appoint a group of members to represent their chamber’s interests. These representatives are known as conferees. Conferees are typically members who sponsored the original bill, or members of the bill’s committee of jurisdiction. They can be chosen to negotiate the entire text of the legislation or given a specific section within their committee’s jurisdiction.

The size of each chamber’s delegation does not have to be the same, as the House and Senate delegations meet but vote separately. For any conference action to be approved, it must pass a separate majority vote by each delegation. This vote makes the size of each group inconsequential. Conferees typically include members of both parties and reflect the party breakdown of the chamber.

The conferees are given specific instructions going into the negotiations to “accept or reject a particular Senate or House provision or take a more generally described political position to the extent possible within the scope of the conference.” These instructions are non-binding.

The Process of Negotiation

Conferees have a significant amount of flexibility over how and when they negotiate reconciliation. However, conference committees can only consider subjects and provisions within the two bills that are disagreements. Any similarities between the bills cannot be amended, and additional conditions outside the scope of the original bills cannot be added. Once solutions are reached, and amendments are offered to reconcile the chambers’ differences, each delegation reports back to its chamber with one of three recommendations:

The third recommendation is the most common and reflects compromise reached following extensive negotiations. In this case, the similarities between the two original bills are preserved. The differing provisions can contain aspects of the previous bills and new language produced during the conference. The result of a conference committee is a single, unique bill that has received the support of the majority of both the House and Senate delegations.

The conferees’ recommendations are sent back to the two chambers through an official report, including detailed joint explanatory statements of the decisions reached during the conference. A majority of each delegation must sign the reports. The chambers can discharge and replace the conferees if a report is not produced within 20 calendar days and 10 legislative days.

The final report is considered by the House and Senate, separately. A chamber can only act on the report if it has the “papers,” meaning that the two chambers cannot take up the report simultaneously. When a chamber receives the papers, the motion to proceed with the consideration of the report is immediately put up for a vote without debate. A final vote is then held on the report, which usually includes debate. Reports can either be accepted or rejected entirely, as no amendments can be added outside the conference. Once both chambers pass the identical reports, the final bill is sent to the president. 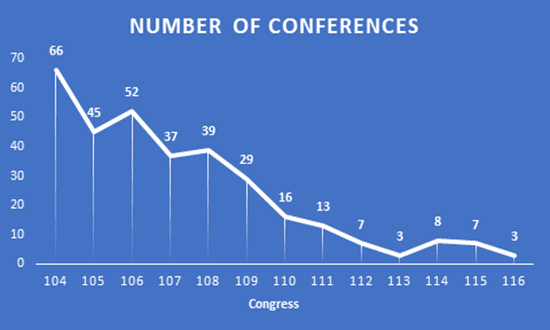 Want to start connecting with Congress?