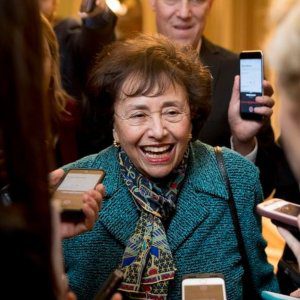 Nita Lowey (NY-17) said she will not seek reelection in 2020. She is the 17th member of the House of Representatives to announce retirement before next year’s elections, and she is also leaving her seat on the House Committee on Appropriations. This is Lowey’s 16th Congressional term as she was first elected to the House of Representatives in 1988. In 2013, Lowey was selected by her colleagues to become the Ranking Member of the appropriations committee, and in 2019 she was the first chairwoman of the committee.

A big question that follows Lowey’s retirement announcement is who will fill her position on the appropriations committee. The Chair or Ranking Member (depending how the 2020 election goes for the House of Representatives) is typically selected by seniority. This was not the case when Lowey beat out Representative Marcy Kaptur (OH-1) for Ranking Member in 2013. Kaptur is still a member of the House Committee on Appropriations and could be the potential next chairwoman if the Democrats keep the House in 2020. It is also might go to another one of the 12 chairmen on the subcommittees, with the 3 most senior members being Marcy Kaptur (OH-1), Pete Visclosky (IN-1), and Rosa DeLauro (CT-3).