Committee assignments are ranked with high prestige and joining a committee means that your political party believes you can best serve this area. In our evaluation of The Health, Education, Labor, and Pensions Committee (HELP), Leadership Connect reviewed the diverse backgrounds of the 22 senators and their specific areas of expertise. As a highly influential Senatorial committee, HELP represents the country’s toughest problems with the goal of bringing legislative solutions. So, what helped them get here?

Currently, three medical doctors reside on HELP, including Senator Roger Marshall (R-KS), Senator Bill Cassidy (R-LA), and Rand Paul (R-KY). Senator Marshall spent his time prior to Congress as a Captain in the United States Army and as an Obstetrician/Gynecologist, while Senator Paul worked in private practice as an Ophthalmologist. Senator Cassidy worked in Louisiana health care practices, founded the Greater Baton Rouge Community Clinic, and was an administrator for the Hurricane Katrina K-Mart Hospital before moving on to the Louisiana State Senate. These Senators offer their unique career and academic experience overseeing health policy on the HELP committee. 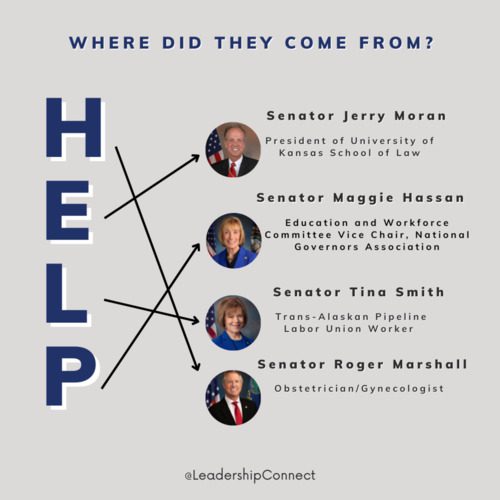 Because the HELP committee covers some of the most impactful legislative issues, additional background is necessary to create thoughtful legislation. Senator Susan Collins (R-ME) was a Legislative Assistant for Senator William Cohen and Staff Director for a Subcommittee on the Homeland Security and Government Affairs Committee. Following that, Senator Collins worked as an Executive Director with Husson University and for the Small Business Administration in New England. Senator Collins brings her administrative experience from Congress, Small Business Administration, and higher education to round out the issue set on the committee. Senator Tina Smith (D-MN) \worked on the Trans-Alaskan pipeline within a labor union, as a Campaign Manager for both Ted Mondale and Walter Mondale, Planned Parenthood Federation of America, and as a Chief of Staff to the Governor of Minnesota. Her work with a labor union member as well as her time with Planned Parenthood allows Senator Smith to actively advocate for health and labor issues. Senator Maggie Hassan (D-NH) brings years of experience as a New Hampshire State Representative, State Senator, and Governor of the state. Senator Hassan’s time with the Massachusetts Department of Children and Families and Associate Counsel of Brigham and Women’s Hospital allows Senator Hassan to relate to many of the health and family related issues that come up on the committee. She was also the Bice Chair for the Health and Human Services Committee with the Nationals Governors Association.

In the House of Representatives, the Committee on Energy and Commerce shares some of the same issue profiles as the HELP Committee. The E&C (Energy & Commerce) has the Health Subcommittee where there are six doctors that bring their educational and professional experience. Representative Larry Bucshon (R-IN), Michael Burgess (R-TX), Neal Dunn (R-FL), John Joyce (R-PA), Raul Ruiz (D-CA), and Kim Schrier (D-WA) all graduated from medical school and worked in the health care field before their time in Congress. Their specialties ranged from dermatology, pediatrics, surgeons, and a few serving as doctors in different branches of the military.

On the energy side, Representative Jerry McNerney has a Ph.D. in mathematics and worked for multiple energy groups before joining Congress including Kenetech Incorporated, Wind Turbine Company, and Hart Power Incorporated. Like Rep. McNerney, Representative Greg Pence became the President of Kiel Brother Oil Company and became the Deputy Commissioner of the Indiana Department of Environmental Management. Both members of Congress have years of experience working with oil and wind turbine companies which is essential to discuss among this committee.

This August recess we will take a deeper-dive and show the balance of experts and staffers to see where Congressional experience lands.