Today, the U.S. Senate confirmed Claria Horn Boom to be District Judge on the United States District Court for the Eastern District of Kentucky. 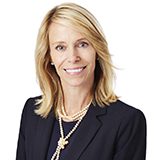 Boom fills the seat vacated by the retirement of former Judge Jennifer Coffman. The seat had been vacant since January 8, 2013.

Currently, Boom is a partner at Frost Brown Todd LLC in Lexington, KY.

Boom, who was nominated on June 7, 2017, was the longest waiting out of President Trump’s District Court Nominees.