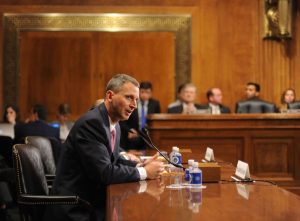 The U.S. Senate confirmed Stuart Kyle Duncan in a 50-47 vote to be Circuit Judge on the United States Court of Appeals for the Fifth Circuit, which covers Texas, Louisiana, and Mississippi.

Previously, Duncan worked for the Becket Fund for Religous Liberty, where he represented Hobby Lobby in its fight against President Obama’s contraceptive mandate.