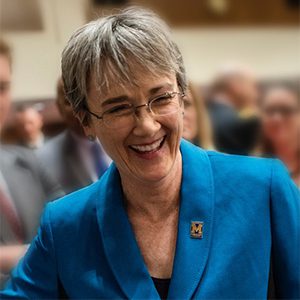 A veteran of the USAF, Wilson is also the first female military veteran to be elected to a full term in Congress, serving as the Representative for the First District of New Mexico from 1998 to 2009. Wilson ran as the Republican candidate in the 2012 New Mexico Senate race, losing to Democrat Martin Heinrich. Her resignation from the USAF marks a return to academia for Wilson; she served as president of the South Dakota School of Mines and Technology from 2013 to 2017.

Wilson announced she will step down as Secretary of the Air Force on May 31. Texas state law requires a three-week waiting period between the announcement of a finalist for a system presidency and their official appointment by the Board of Regents. Her appointment is expected to be finalized on or after March 29, with a start date to follow.