By Sanja Klima-AbboudFebruary 25, 2019 No Comments 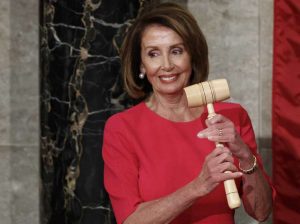 When Representative Nancy Pelosi (D-CA, 12) took the gavel as Speaker of the House, lobbyists began to maneuver for access to her office.

Leadership Connect has identified a small but influential network of her former staffers and current lobbyists whose connection to Pelosi has raised their importance in Washington.  They have the advantage of a longstanding working relationship with the speaker as they weigh in on her aggressive legislative agenda of addressing voter registration, drug pricing, immigration and climate change, among other initiatives.

Brownstein Hyatt Farber Schreck LLP is rated the second-largest lobbying firm in Washington based on lobbying expenditures, according to the Senate Office of Public Records. In June, the firm hired Pelosi’s former chief of staff, Nadeam Elshami, as its policy director¸ representing clients on legislative issues, including trade policy, taxation, Medicare and Medicaid, drug discount programs and net neutrality. Elshami was Pelosi’s chief of staff from 2013 to 2017, overseeing operations, member relations, communications and policy. Before that, he was the Minority Leader’s communications director and senior advisor, implementing the successful passage of the Affordable Care Act, Dodd-Frank Wall Street Reform and other legislation. After his departure from the Hill in 2017, Elshami briefly worked as a lobbyist for Signal Group Consulting, before being poached by Brownstein Hyatt Farber Schreck in anticipation of the leadership shift in congress. His most recent lobbying filings are for high-paying corporate clients, such as Kellogg Company, JL Audio Inc., National Cable & Telecommunications Association, Johnson & Johnson, Amgen USA Inc., Cannabis Trade Federation, Walgreen Co. and FedEx Corp. Elshami is a frequent contributor on CNN and is a board member of the Capital Area Immigrant Rights Coalition.

Facebook Inc. is another big player in Washington, spending close to $12,700,000 in 2018 in lobbying as it tries to address its privacy-related controversies. Catlin O’Neill, a longtime former aide to Pelosi, is now director of U.S. public policy at Facebook. Since joining the social media network in 2013, O’Neill has represented the interests of the tech company and served as one of its top lobbyists, advocating on issues such as intellectual property and copyright law, cybersecurity and data security, temporary high-tech worker visas, government surveillance programs, privacy legislation, tax policies, NAFTA, online advertising and election integrity. She has played a key role in defending Facebook as it faces an onslaught of privacy-related controversies and a push for regulation. The granddaughter of former Speaker Tip O’Neill, she spent over a decade working for House Speaker and Democratic Leader Pelosi, including two years as chief of staff. The younger O’Neill also serves on the board of directors of the California State Society, a bipartisan social networking organization in Washington, along with Robert Edmonson, Pelosi’s current chief of staff, and Jennifer Poulakidas, vice president of congressional and government affairs at the Association of Public and Land-grant Universities (and Pelosi’s former legislative assistant).

Arshi Siddiqui, who served as Pelosi’s policy advisor from 2003 to 2010, now works for Akin Gump Strauss Hauer & Feld LLP, ranked first based on lobbying spending in 2018. Siddiqui’s clients include corporations and interest groups, including CVS Health, Hospital Coalition for Agency Accountability, Hospitals for Accountability Through Judicial Review, KKR & Co. LLP, Liberty Mutual Insurance Co., UPS and United Technologies, among many others. She actively lobbies on issues , including healthcare policy, taxation, international regulatory matters and trade negotiations, among others. Siddiqui serves on the board of governors of The Bryce Harlow Foundation, a nonprofit organization whose primary activities include “supporting the next generation of leaders in the lobbying, government relation and related professions.”

There are a few other former staffers of the House Speaker who are now lobbying in Washington. Cindy Jimenez Turner, who served as Pelosi’s advisor from 2002 to 2007 and now works for United Technologies as senior director for government relations. Pelosi’s former strategist, Brian Wolff, is now executive vice president, public policy and external affairs at Edison Electric Institute, responsible for direct lobbying, grassroots outreach, coalition building and strategic communications functions. Wolff began working with Pelosi after he went to California in 1994 to work for the Clinton/Gore campaign and most recently, as stated in the Arkansas Democrat-Gazette, he helped her secure her congressional leadership role. “I’ve just spent about eight weeks making sure that Pelosi is speaker again. We’ve been successful together a lot and this process we’ve been in, the latest, it seemed natural to me that I wanted to get back in and help,” the Arkansas Democrat-Gazette quotes him as saying.

Pelosi’s staffers have been exceptionally loyal to her, spending decades of their careers with her, and their revolving door activity has been minimal compared to other Hill staffers. Yet, the few that did cross over will now have even greater influence.

(Wayne McKenzie contributed to this report)